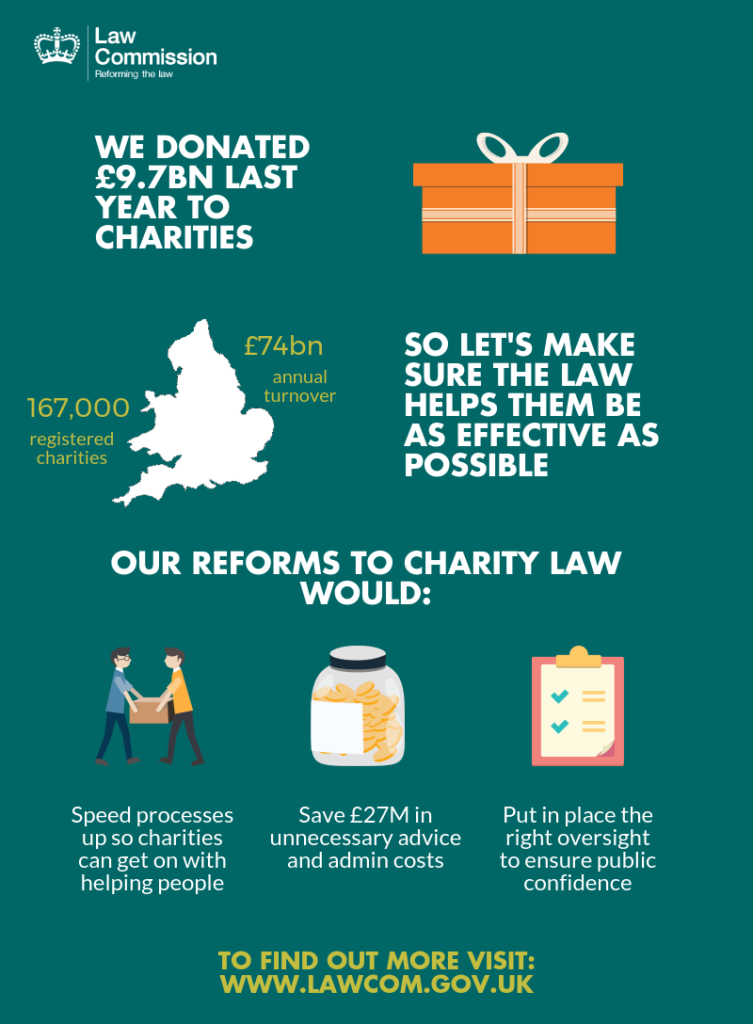 Changes to the law could help charities run more effectively, according to the Law Commission.

In a new report – Technical Issues in Charity Law – published today, the Commission says that problems in charity law prevent or delay legitimate charitable activities. Discourage people from volunteering. And force charities to obtain professional advice that should not be necessary.

As a result the independent law reform body has recommended changes to remove unnecessary bureaucracy whilst ensuring proper protections for the public, who donate around £9.7billion each year.

“Charities are a force for good and millions regularly donate to help others. But the rules that govern them have to be right.

“As it is, some of the technical law around charities is inefficient and unduly complex.

“Our reforms would help make sure charities use their time and money in the best way to support their good causes, whilst providing oversight to ensure public confidence.”

Putting the right rules in place

Charities are set up in a number of different ways, each with their own legal requirements.

But many charities struggle with a range of technical issues in the law, which causes them unnecessary expense and prevents them dedicating their full resources to the public good.

Alongside this, the law does not provide the Charity Commission with all of the tools it needs to promote public trust in charities.

As a result, the Technical Issues in Charity Law report makes a number of recommendations to maximise the efficient use of charitable funds whilst ensuring proper safeguards for the public.

For charities, recommendations include:

For the Charity Commission recommendations include:

The reforms will save charities a large amount of time, as well as save costs. Those costs savings include an estimated £2.8m per year from increased flexibility concerning sales of land.

Lord Hodgson of Astley Abbotts, who chaired the 2012 review of the Charities Act welcomed the review. He said:

“In my 2012 official review of the Charities Act 2006, I found that charities faced a number of historic obstacles under the current law. These unnecessary burdens on trustees act like barnacles on a boat, causing a drag when all should be plain sailing.

“Today’s report from the Law Commission is important. Although its recommendations may appear to be highly technical, cumulatively I believe they would have a huge impact on the sector, helping trustees to work effectively in modern-day conditions.

“Since the recommendations have now been consulted on extensively and are approved of by the sector, I hope the government will find time to implement them speedily.”

“As the Law Commission’s report today notes, its recommendations are technical but important, with real practical consequences for charities. It offers a real opportunity to remove some of the complexity and inconsistencies which can make charity law difficult both to apply and to regulate.

“I hope the Government will now bring forward the draft Bill to implement some much needed reform.”

The project is not a full review of charity law. The terms of reference relate to selected technical issues. Those issues do not include matters such as the law of public benefit and the charitable status of independent schools.

The regulation of fundraising activities does not form part of our terms of reference.

Fundraising was an issue addressed by a cross-party review in 2015, measures were included in the Charities Protection and Social Investment Act 2016, and the new Fundraising Regulator is already operational.

The Law Commission’s work on charity law developed from its 11th Programme of Law Reform, and from Lord Hodgson’s 2012 review of the Charities Act.

This reports follows the Law Commission’s 2014 Social Investment by Charities report.  The recommendations for reform in that report were included in the Charities (Protection and Social Investment) Act 2016, which received Royal Assent on 16 March 2016.