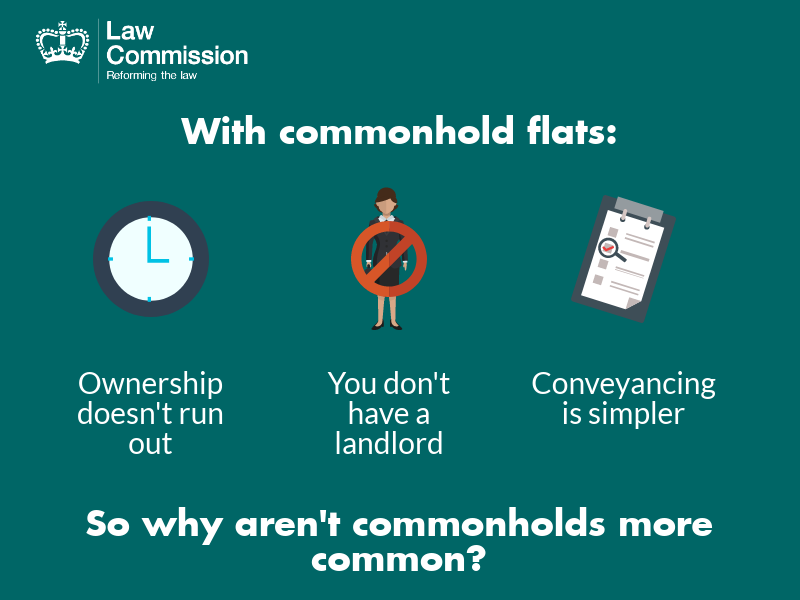 The Law Commission is asking flat owners, housebuilders, mortgage lenders and lawyers to help shape a law which could help people own their flats outright.

Commonhold was introduced in 2002 as a new way to own property. It allows a person to own a freehold ‘unit’ – like a flat within a building – and at the same time be a member of the company which manages the shared areas and buildings.

Crucially, unlike leasehold, owners own their ‘unit’ outright, so their ownership won’t run out at a point in the future and they won’t have a landlord. Despite this advantage fewer than 20 commonhold developments have been created since the law came into force in 2004.

As a result, the Law Commission is launching an 8 week call for evidence to find out what’s stopping commonhold taking off.

“It’s clear leasehold law is a problem with some managing agents charging over the odds for the upkeep of shared areas, and the process of extending a lease costly and time consuming.

“Commonhold provides an alternative – giving unlimited ownership of a property and a stake in how the rest of the building or shared area is managed. But less than 20 have been created in the last 14 years.

“We want to find out what’s stopping people, and how the law could be improved to make commonhold more common.”

In England properties are normally bought and sold as either a leasehold or a freehold. A leasehold means that someone owns a property for a set number of years on a lease from a landlord (the freeholder).

There are now estimated to be over 4 million leasehold properties across England but concerns have been raised over this ownership type. More than 6,000 responses were submitted to the recent government consultation on unfair leasehold practices. The vast majority of responses expressed their concerns about the buying experience and living in a leasehold property.

But there is another way – commonhold.  Commonhold has a number of advantages over leasehold. These are:

So alongside its wider efforts to reform leasehold law, the Law Commission is looking to find out why commonhold’s take up has been so low and will propose reforms to reinvigorate it.

The Commission is asking for views on three broad themes:

Following this call for evidence a full consultation will address the technical legal reforms necessary for commonhold to succeed.

Whilst the Commission will be focussing solely on legal issues, it also invites comments on what other steps should be taken to encourage the use of commonhold. These wider issues will be considered by the Government separately to the Law Commission.

In December 2017 the Law Commission announced that it was to start a project on residential leasehold and commonhold as part of its 13th Programme of Law Reform.  This is the first step in the project.

The call for evidence can be found at https://www.lawcom.gov.uk/project/residential-leasehold-and-commonhold/ at 00:01 22 February.