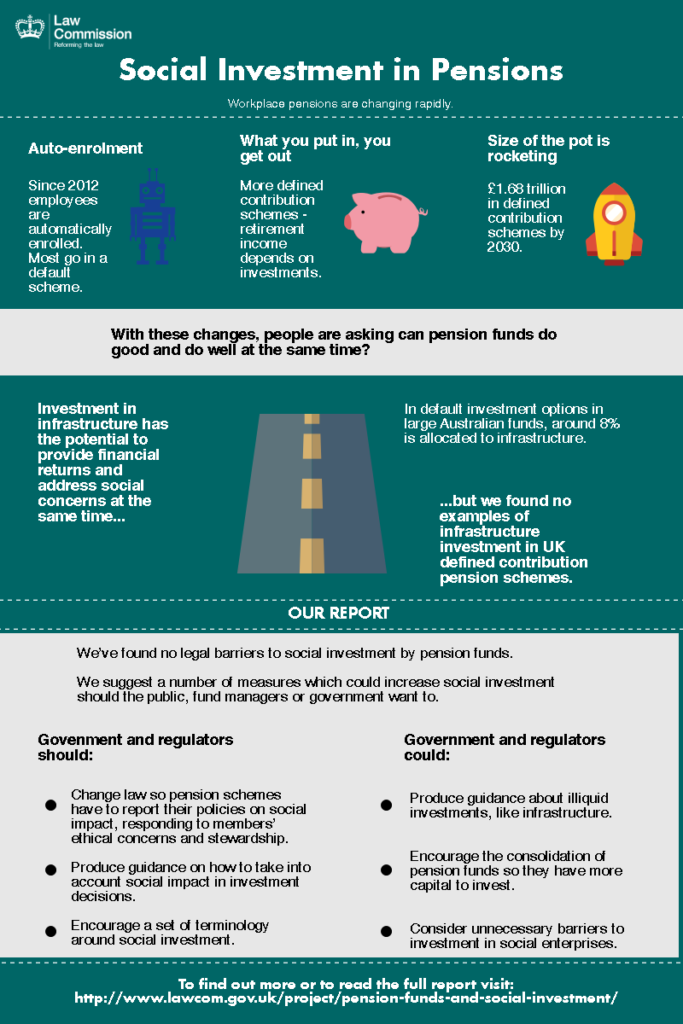 There are no legal or regulatory barriers to pension schemes making social investments, according to a new report by the Law Commission.

Since auto-enrolment was brought in by the government in 2012, the amount of cash in defined contribution pension schemes has rocketed. By 2030 they are now expected to total some £1.68 trillion.

This raises questions about how the new pension assets are to be invested and whether at least a proportion could be invested for the wider social good.

Investment in property and infrastructure has the potential to provide financial returns and address social concerns at the same time. But the Commission says that, unlike in other countries, UK defined contribution schemes are not investing in social investments like infrastructure.

“Defined contribution pension schemes will be investing billions of pounds over the next decade, and it’s only right that they seek to get the best returns for their clients.

“But it is possible to do well and do good at the same time and we’ve seen billions invested in infrastructure in places like Australia delivering for savers and society.

“In the UK there seem to be some misconceptions as to whether this is allowed for these pension schemes. We’re clear, legally, there’s nothing to stop them doing the same.”

Increasingly, defined benefit pension schemes – where the employer guarantees the saver a certain income on retirement – are being replaced by defined contribution schemes.

This is where a saver’s income on retirement depends on the performance of the pension fund investments.

Investment in property and infrastructure has the potential to provide pension schemes with a financial return as well as being able to invest for other reasons, such as to address social concerns.

Defined benefit schemes are already investing in social impact projects like infrastructure, including £370 million for the Thames Tideway Tunnel to upgrade London’s sewerage system. And large Australian funds have an average allocation of roughly 8% to infrastructure in their default arrangements.

So in November 2016, the Government asked the Law Commission to look at how far pension schemes may or should consider issues of social impact when making investment decisions. And to identify any legal or regulatory barriers.

Now, following a call for evidence, the Law Commission has found that there are no legal or regulatory barriers to social investment. However, the independent body has identified structural and behavioural barriers within the pensions industry which could explain the low levels of social investment by defined contribution pension schemes.

In a report published today the Law Commission has identified steps which could be taken by the Government and regulators to lift these barriers. Including:

The law permits pension trustees to make investment decisions that are based on non-financial factors (such as environmental and social concerns), provided that:

Although financial return should be pension schemes’ predominant concern when investing, the law is sufficiently flexible to allow other factors –like environmental or social concerns – to be taken into account.