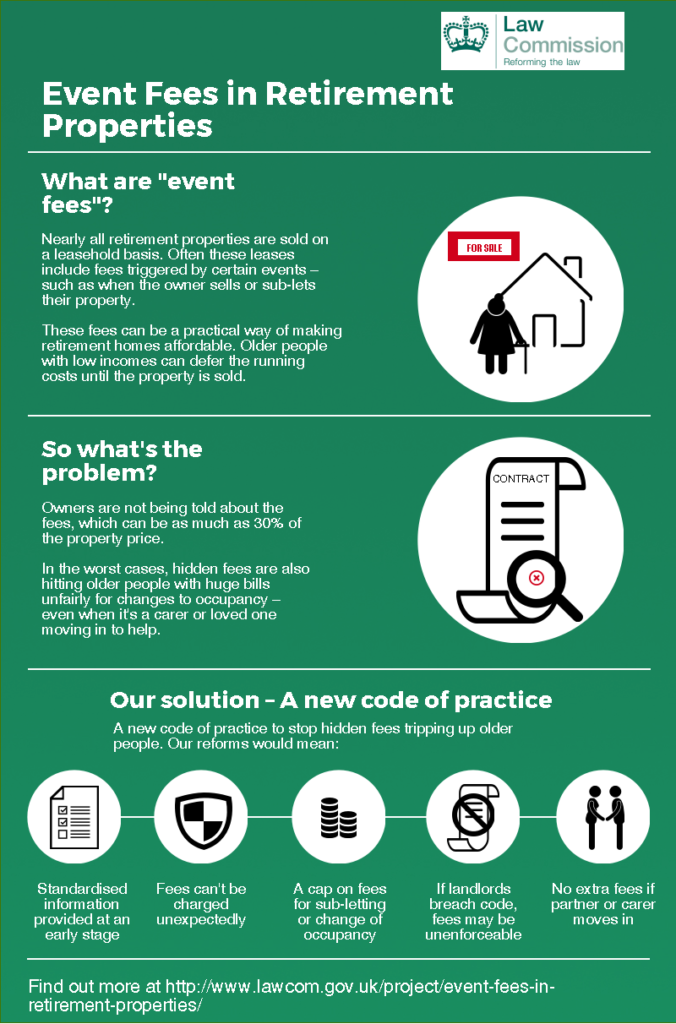 Older people who have moved into retirement leasehold properties could be being hit with unfair fees worth thousands of pounds, according to the Law Commission.

After a two-year investigation, the independent law body has found that there is real potential for abuse in the charging of so called “event fees” or “transfer fees”.

When the system works well, which it does most of the time, these fees help offset service charges payable in good quality retirement housing. But a few rogue landlords may hide complicated formulas deep in the small print or charge older people fees in unexpected situations.

Owners are not always being told about the charges, which can be up to 30% of the property price. Others may be hit by huge bills for changes to occupancy, even when a carer moves in to look after the owner or where they have to move into a nursing home and sub-let their property to cover costs.

Now in a report published today, the Commission urges the Government to regulate the sector and bring in a new code of practice – to make these fees more transparent, stop unexpected fees and allow a right to challenge unfair fees.

“For many, event fees are a good way to enable the purchase of a quality retirement property now, by deferring payment of some of the running costs until they come to sell their home later.

“But, in the worst cases, a few unscrupulous landlords are getting away with very high hidden fees buried deep in the small print of a long and complicated lease.

“We’d urge the government to crack down on rogue landlords by regulating the sector and making sure that before consumers sign on the dotted line, they have already been told exactly what’s being provided for their money.”

Each year thousands of older people consider a move to a smaller property. This may be as a result of a recent bereavement or that their care needs have changed.

For many, specialist retirement housing provides a good option with health and social benefits for people who could otherwise become isolated. However, high-quality specialist housing is expensive and can include services such as communal facilities, security and on-site care.

Nearly all of these properties are sold on a leasehold basis and many of these leases include a fee triggered by certain events – such as when the owner sells or sub-lets their property.

These fees can be a practical way of making retirement flats affordable. Particularly for older people with low incomes, because they can defer some of the running costs until the property is sold.

These charges, known as “event fees”, are levied by the majority of developers of the 160,000 retirement properties in England and Wales.

With event fees being anywhere up to 30% of the total property price, they can run into the tens of thousands of pounds. Some are not clear about what services can be expected for the money and concerns about this were raised by the Office of Fair Trading in 2013.

As a result, the Department for Communities and Local Government asked the Law Commission to consider how to make event fees fairer for older people.

Now, following public consultation, the Commission is recommending the regulation of the sector and changes to the law to bring in a new code of practice, which outlines minimum mandatory standards that landlords must comply with. Indeed, the Law Commission has heard from some providers in the industry who are in favour of higher regulation to stamp out bad practice and to provide greater protection for consumers.

Our recommended reforms would mean:

Currently there is a shortage of retirement properties and legal uncertainties are dissuading developers from building the homes older people need, and investors from providing the required funding.

But, if the legal uncertainty around event fees is removed or reduced, the retirement leasehold sector estimate that there could be an additional £3.2 billion investment by private companies over the next 10 years to build more high-quality retirement leasehold properties.

Today the final report with recommendations to government for reform is published here: https://www.lawcom.gov.uk/project/event-fees-in-retirement-properties/

The proposed reforms would apply to new leases after the reforms are implemented and, in some cases, would take effect on the next sale of an existing lease.